This Little Light by Christa Brown

"You have to tell everything." Christa Brown, the webmaster behind Stop Baptist Predators, told me when I spoke with her in Texas back in January, 2008.

I was on my way to Jacksonville, Florida to host a public awareness meeting on the subject of clergy abuse. I made a brief stop to interview Christa for a podcast.

Bob Gray, my former pastor who was arrested on multiple charges of child abuse, had not been a Southern Baptist for decades.

There was still the nagging question concerning his early days. Did the SBC of the fifties know about any accusations against Gray? Did they simply allow him to become 'independent' as a way of washing their hands of him?

After the podcast was recorded, Christa and I met the next day and discussed the various methods of getting the accounts of sexual abuse by clergy out in the public arena.

I mentioned the difficulty I was having in writing a book about it.

There were just too many crossovers where regular people, not wanting to become public figures, would be thrust into the limelight. It wouldn't just involve other people, though. It would also be about the dark secrets most of us harbor about ourselves. That would be the most difficult hurdle.

Christa Brown jumps over that hurdle in This Little Light.

She opens herself up by telling the story of how Eddie Dunagan, a youth minister, capitalized on Christa's abusive situation at home. She called the police after witnessing an act of family violence.

The pastor criticized her for doing so. Some things just don't need to be reported!

Eddie used this situation as an opportunity to manipulate himself into her life.

There was no romance or sweet talk. Just bible thumping and scripture twisting.

"God gave us all sorts of ways to show our love for one another," he said. "All of these other ways are good ways that God gave people so they could show their love before they're actually married."

Gee, I wonder if Eddie had the guts enough to preach that to his youth group?

A 'well meaning' friend encourages Christa in this relationship:

"If Eddie says it's God's will then it must be God's will." contended Brenda, "You shouldn't doubt him."

With advice from 'well meaning' friends, who needs the condemnation of enemies?

Eddie badgers her into drinking beer. She drinks it, and whatever drugs might have been implanted in the alcohol. She wakes up naked in the parsonage. Eddie then chuckles and tells her she is still a virgin.

We flash forward to adulthood.

Christa now has a daughter about the same age she was when Dunagan molested her.

She wants to make sure her molester is no longer in the pulpit. After all, what are the chances he, or any other predator, might attempt something with her daughter?

Christa is shocked to find that not only is Eddie still in the pulpit, but other accounts of molestation are being reported by victims from her former church.

She knows the statutes of limitations have passed (Christa is a lawyer), so she envisions a creative solution:

A labyrinth garden that leads to a statute of a millstone.

This monument would not only honor the victims of clergy abuse. It would be an inspiration to victims, and a reminder to churches that they must be vigilant in confronting sexual predators who represent them as pastors and youth leaders.

The higher up's seem to agree. Unfortunately, this is but the first of many experiences where hopes are elevated, only to be crushed by the reality they merely agreed with Christa to get her out of sight and mind.

This leads her to SNAP, the Survivor's Network for those Abused by Priests. She attends the meetings, then throws herself into activism.

She visits her home church and puts flyers on the automobiles. The congregants will know that one of their ministers abused a young girl, and the church did nothing. She contacts people she suspects have been molested.

The church's lawyer sends her a letter demanding she cease these activities.

The lawyer, in this case, happens to be Phil Waller, the attorney of choice for the Baptist General Convention of Texas. He also claims all the church members as his 'clients'.

Christa Brown compares him to Harvey Keitel's Mr. Wolfe from Pulp Fiction. His job is to 'clean up' the mistakes of the Baptists. In the Bob Gray world, that man would be David Gibbs.

If the Southern Baptist Convention thought a lawyer would intimidate another lawyer, they obviously had another thing coming.

This Little Light gives us a fly on the wall insight to the behind the scenes machinations involved with Christa's quest for a written apology for the silence she experienced from church officials, financial costs, and, even non monetary requests like simply playing the piano at the church of her youth one last time.

One of the fascinating parts of the book involves a meeting where they hammer out the details behind the SBC's 'apology' letter. We read how the leaders, and their attorney, argue over every single word in order to sneak in phrases that would excuse themselves for ignoring the abuse she suffered.

A mistake, on behalf of SNAP, leads to the SBC making a bold, obviously exaggerated claim, that SNAP apologized for 'false charges'.

The 'false charge', in this case, being the result of secretarial neglect.

Christa publically accuses the SBC of ignoring a letter she sent. The SBC did send the letter, but it is lost amidst a slew of piled up mail at SNAP headquarters. When the error is discovered, Christa issues a public apology for saying SNAP never received the letter.

SBC officials take advantage of this by issuing press releases that SNAP is apologizing for 'false charges'.

The letter is eventually discovered.

It is a standard 'business as usual'. Not a real apology.

Christa, like many victims of clergy abuse, realizes she is dealing with sharks in the water. She witnesses a beloved music minister, whom she thought would at least confirm her story, suddenly backtrack to make her relationship with Dunagan seem consensual.

This leaves a sour taste in her mouth for how religion, specifically the fundamentalism of the SBC, intimidates and encourages corruption. Phrases like 'God's will' literally make her want to throw up. At various points in the book, she actually does.

The finale has her answering another 'well meaning' Christian who encourages her to put her faith and trust 'in Him':

It would be a false statement to say this means Christa has crossed the line into Atheism. If you listen to her interviews at Stop Baptist Predators, you will hear the word 'God' injected into some of her interviews.

There is a growing amount of work being published, from Julia Scheere's Jesus Land to Michele Ulriksen's Reform at Victory, where victims of religious abuse are mincing no words.

Those authors are not giving aid and comfort to 'the enemy' and make no bones about how their abusers were making up the religious BS as they went along.

There is an entire demographic of victims who will never be reached because of 'well meaning' Christians. Their survival is linked to rejecting the falsehoods thrust upon them, but because of all the talk of 'God's will', they tune out. That's too bad, because in the battle for accountability, alliances are everything.

Religious, and pro family, organizations have lost their moral credibility by ignoring abuses done by leadership.

Victims become survivors by realizing their instincts were right.

Such leaders are not worthy of respect.

Victims, if they wish to become survivors, must take their own journey to resolve the confusing issues of sex, religion, and the challenges of 'working and playing well with others'. All talk of theological matters really needs to be left at the front door.

I find it interesting that the dialogue I've experienced the last two years of blogging about the Bob Gray case always leads back to the question, "You don't condemn all religion because of the actions of the few?"

Funny, nobody ever seems to ask how clergy abuse affected the sex lives, marriages, families, or self esteem of victims. Everything always seems to revolve around religion, like the other issues are an inconvenient add-on.

Imagine somebody who just had their family slaughtered by a lone gunman being lectured by a 'well meaning' NRA supporter that 'guns don't kill people, people kill people'.

"In spite of your tragic experience, you're still for the second amendment, aren't you?"

It's that insensitive. Not very 'well meaning'.

This Little Light is a book worthy of discussion groups at libraries or your local book dealer.

The simple act of telling her story opens the door for a variety of discussions ranging from the use of art as both a public awareness and recovery tool, the proper place for religious discussion when dealing with clergy abuse victims, and the type of scars child sex abuse, clergy or not, carries into adulthood.

Podcast: A conversation with Christa Brown.
Posted by Mr6 at 11:19 AM

Book review and posts of Christa's book, This Little Light:

BECAUSE IT MATTERS ~ FREEDOM IN CHRISTIANITY [Dani Moss] > The Invisible Holocaust in Our Church.

BECAUSE IT MATTERS ~ FREEDOM IN CHRISTIANITY [Dani Moss] > The Church Holocaust Through One Person’s Eyes.

The Fighting Fundamental Forums > THIS LITTLE LIGHT: Beyond a Baptist Preacher Predator and His Gang --BASS's review.

"Let's Pray For Your Forgiveness!" or "Bad Southern Baptist Advice to an Abused Child!"

Don't Go In The Church 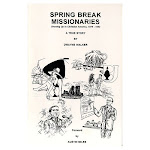